This blog is in a state of suspended animation

in an idle moment i did a wordle of the novel i'm writing. it seems to convey absolutely no information whatsoever except that it is in english and set neither in space nor the jungles of brazil. but it does confirm that houses always loom large in my writing. i am, after all, the son of an architect.

actually, the word "fire" is quite big.

i wrote a piece for the obersver about my fear of flying and oxfam's development work in ethiopia and somewhat convoluted link between them.

"I have been terrified of flying for at least 20 years. I try very hard not to fly, but when I'm forced to I feel sick and frightened and angry for several weeks beforehand. I spend my time abroad thinking constantly about the inevitably fatal return journey and when I get home I suffer a mild form of PTSD in which I find even the sight of an aircraft upsetting. In the past few years my wife and our two boys have started to go on holiday without me. I console myself that I have a very modest carbon footprint, but I dream of visiting Iceland or the Canadian Rockies and increasingly I'm haunted by the idea that I'm going to find myself lying on my deathbed knowing that I've spent one life on one planet and that my cowardice has made it so much smaller..."

you can read the rest of it here.

you can read more about oxfam's work in ethiopia here.

and i hope the estimable petterick wiggers doesn't mind me borrowing his picture me and alamu kefa. you can visit his website and see his wonderful pictures of subjects far more interesting than me here. 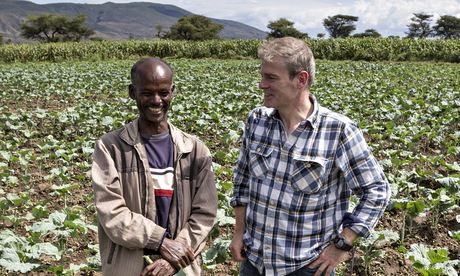 the wilson county school board in tennessee has banned curious incident from its reading list for ninth graders taking honours level english classes (full story here). my own feelings are largely ones of weary bemusement. it’s happened before on many occasions (sometimes blasphemy and atheism are added to the charge sheet) though i’m only aware of cases in the usa. curious is not short of readers, banning it almost certainly makes the book more attractive to those from whom it is being withheld and these kind of controversies make people talk and think hard about books and reading which is always a good thing.

it's a little self-serving for an author to get on their high horse about a book of their own being banned. better to save that indignation for the bannning of someone else's book when it has more force. some thoughts, though…

the fact that there is swearing in a book does not mean that the book “promotes swearing” any more than it promotes, for example, killing a dog with a garden fork, or telling your son that his mother is dead.

because christopher is largely deaf to tone and subtext he is utterly oblivious to the intended effect of “bad language” and it has absolutely no power to offend him. i find this funny. i think it also says something instructive about how swearing works. there is a good (and, I confess, complimentary) article about this subject by john mullan here.

you cannot stop children soaking language of all kinds (unless you take them halfway up a mountain and shut the door and burn the tv and that’s not a recipe for a happy adulthood). what children need to learn is how to use language in context, how to articulate their ideas and feelings, how to be heard in a certain way by some people and in another way by other people, how not to offend and (occasionally) how to offend. it’s not about what you say. it’s about what you say to whom, and when, and how.

there is a temptation to suggest that banning books is a sinister act. it’s too ridiculous and self-defeating to be sinister. it is pretty much guaranteed to have the opposite effects to those intended. and it makes you look foolish.

in november of 2013 new rules banned families and friends from sending books to prisoners. i read about it in the following article by frances crook of the howard league for penal reform:

why has grayling banned prisoners being sent books?

i then spent the next day helping the howard league gather writers' signatures for an open letter to the daily telegraph. the following morning i was asked onto the today programme on radio 4 to discuss the issue. i got considerablty less time to speak than jeremy wright the prisons minister so i'm going to put my thoughts down at greater length here.

we give books to children and we encourage other people to give books to children because we think of books as an unequivocal good which makes them better educated, more rounded people. yet the ministry of justice seeks to improve the behaviour of prisoners byrestristing access to books as if they were a different species of human being.

even prisoners in guantanamo bay can receive books as gifts.

this is not just a punishment for prisoners. it's a punishment for their families who have done nothing wrong - parents, wives, husbands, children. there's a great scheme running in many uk prisons called storybook dads (link here) in which dads in prison who have young children can read a book, record that reading on a cd or dvd and have it sent home so that their son or daughter can listen to, or watch, their father reading 'where the wild things are' or 'the very hungry caterpillar' while they have a copy of the book on their lap. but if that son or daughter reads 'we're going on a bear-hunt' and wants to send dad a copy so they can read it together, they can't because this is forbidden as a means, apparently, of improving their father's behaviour.

a book is not just an object. it's not a packet of fags or a bar of chocolate. sharing is what makes books work. it's not simply that i read and that you read, but that i read something and love it (or hate it) passionately and want you to read it, or vice versa, that we have a deeply private experience yet we can share it. this is one of the things which makes a book a near-magical object, and not a consumable.

there are big literacy problems in prison. 1 in 5 prisoners admit to problems with reading and writing. many more have problems they don't admit to. nearly half of all prisoners in uk prisons have english skills below gcse level. and it doesn't take a genius to work out that poor literacy skills increase your chances of going to prison and going back to prison. it's not just that poor literacy skills prevent you getting jobs, they prevent you even finding out about jobs and applying for them.

and yes, prisoners can buy books in prison. but if they are lucky enough to get a job inside they will earn £8 a week. they can get a small amount of extra money remitted from home but they are limited to a maximum spend of between £10 and £15 a week depending upon their earnt status. they have to use this money to buy everything - toothpaste, clothes, coffee, phonecalls (which are more expensive in prison)... if they do somehow save enough money to buy books they have to do so from an approved catalogue the contents of which are a secret. as is the supplier (the minister was asked about this catalogue but refused to answer).

i've been into prisons. in my small experience they contain a minority of very unpleasant people, some very damaged people but a majority of shockingly normal people. the press talks in terms of 'us' and 'them'. there is no 'us' and 'them'. and whatever you happen to think of people in prison, sooner or later they will be liivng round the corner from you. do you want them humanely rehabilitated or do you want them under-educated and resentful?

you don't reintegreate people into society by isolating them from society.

to repurpose a line from the great billy bragg, 'you don't turn criminals into citizens by treating them this way'.

and here's another one:

another vintage nhs cartoon of mine from the nursing times of 1989 or thereabouts:

another cartoon from the deep past (and the nursing times):